When Megan bids on her grandfather’s painting,the last thing she expects is to be outbid by Michael Kirk, her first love. He left town years ago leaving her reputation–and her heart–in tatters.She must keep her grandfather’s final legacy in her family, but Michael claims to need it for his career. He also claims to want Megan back in his life, and her betraying heart doesn’t mind the idea…but does Michael want her or the painting?

Seeing that my release date followed St. Patrick’s Day, I thought I’d share a little bit about that saint’s life. Read down to the bottom for a chance to enter my drawing.

Many folk ask the question ‘Why is the Shamrock the National Flower of Ireland ?’ The reason is that St. Patrick used it to explain the Holy Trinity to the pagans. Saint Patrick is believed to have been born in the late fourth century, and is often confused with Palladius, a bishop who was sent by Pope Celestine in 431 to be the first bishop to the Irish believers in Christ.

Saint Patrick was the patron saint and national apostle of Ireland who is credited with bringing christianity to Ireland. Most of what is known about him comes from his two works, the Confessio, a spiritual autobiography, and his Epistola, a denunciation of British mistreatment of Irish christians. Saint Patrick described himself as a “most humble-minded man, pouring forth a continuous paean of thanks to his Maker for having chosen him as the instrument whereby multitudes who had worshipped idols and unclean things had become the people of God.”

Saint Patrick is most known for driving the snakes from Ireland. It is true there are no snakes in Ireland, but there probably never have been – the island was separated from the rest of the continent at the end of the Ice Age. As in many old pagan religions, serpent symbols were common and often worshipped. Driving the snakes from Ireland was probably symbolic of putting an end to that pagan practice. While not the first to bring christianity to Ireland, it is Patrick who is said to have encountered the Druids at Tara and abolished their pagan rites. The story holds that he converted the warrior chiefs and princes, baptizing them and thousands of their subjects in the “Holy Wells” that still bear this name.

Enter by “liking” me on my Facebook author page, then leave a comment about how you celebrate St Patrick’s Day or Easter, if you do. If not, just comment with the name of your favorite holiday.

Easter Monday one lucky winner will be sent:

A Ty Maryland style crab Beanie Baby, print copy of my 2007 novella “From Now On” and non-fiction anthology “Fiction and Truth,” (edited by Kathy Ide), pdf copy of my novella “Prodigal” and a silver-plated heart shaped ring box. 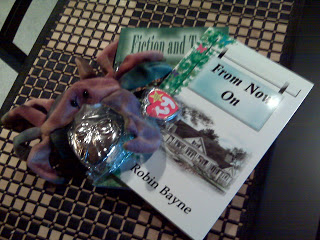