Based on the new version of the nursery rhyme Monday’s Child comes a new series of romantic suspense novels by Clare Revell. One for every day of the week.

Monday’s Child must hide for protection,
Tuesday’s Child tenders direction
Wednesday’s Child grieves for his soul
Thursday’s Child chases the whole
Fridays Child is a man obsessed
Saturday’s Child might be possessed
And Sunday’s Child on life’s seas is tossed
Awaiting the Lifeboat that rescues the lost. 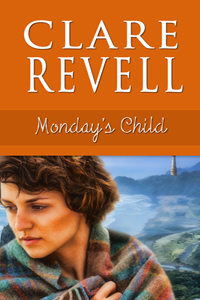 Monday’s Child must hide for protection…


This was not the assignment Luke Nemec expected when he came to the UK—babysitting a beautiful widow. It wouldn’t be so bad if Sara wasn’t such a hostile witness. Despite her complaints and continued jibes, Luke finds himself falling for her.

When, Sara Barnes is thrown into the witness protection programme, she becomes the “wife” of Lt. Luke Nemec, an American cop on temporary assignment with the British police. Despite Luke’s American bravado, she finds he’s kind and considerate in ways her late husband never was.

But things aren’t always what they seem, and Luke soon realizes he’s fighting a battle of two fronts to keep Sara safe. Loyalties are called into question, and he’s no longer certain who he can trust. Luke is way out of his depth. As the threats against Sara escalate, it’s a race against time to find her husband’s killer before Sara is silenced forever.

Luke smiled at her and offered his hand.

Sara ignored it, staring aghast at Wilcox, shock resonating through her, and not just at his abrupt tone. Was there something wrong with her hearing? There was no rank of lootenant in the English police force, for one thing. Or leftenant come to that. For another, he didn’t look like a soldier, and—wait a minute, did he say marriage? “I’m sorry?”

“Lieutenant Nemec will be with you on a full-time basis. As far as the world is concerned, you’ll be his wife. First name terms only.”

Furious, Sara shook her head. Her eyes narrowed and her lips set. “Oh, no. There is absolutely no way, either in this lifetime or the next, that—”

“Don’t you Sara me. I am not going to live with anyone, Inspector. Especially someone I’ve only just met. And I am definitely not marrying him.” She glanced at Luke, deliberately pronouncing his title the English way. “No offence, Leftenant Nemec.”

Luke slid his hands into his pockets. “None taken, but my name is Luke. If it helps any, I was just told myself.”

Taken aback by his accent, Sara did a double take. “You’re American.”

“And you’re British.” He tilted his head, flashing his teeth in a broad smile.