Adventures in Writing…and in Life by Sandy Nadeau

So you want to be an adventure writer…
I have always loved going on adventures, and I see most
things in life as one. For nearly thirty years now, my husband and I often head
into the mountains of Colorado to find a new adventure. We have come across several
whether just out for a drive, looking for fall color, searching for Bighorn
Sheep, moose, or the elk herds during the rut, often finding what we set out
for. When I took more serious steps to becoming an author, it seemed natural to
just write adventures. Be careful what you pray for. 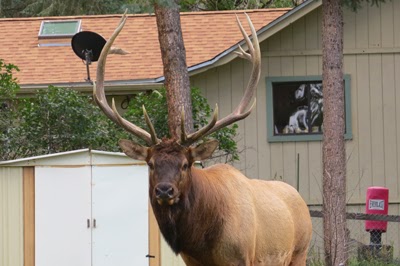 This year, we began to hear the familiar call of the cranky male
elk gathering the females earlier than normal. This annual wildlife event brings
out many spectators. You wouldn’t think your home town could be overtaken by
such a large animal along with his growing harem. But it is part of life here
in the foothills. Not a rare sight, but not usually in my back yard.
I have a pet peeve, having lived here so long. There’s real
danger to approaching wildlife. If they get scared, well, prepare to be kicked
like you never dreamed of. One time, we watched one gentleman sneak around some blue
spruce trees at the park to get a good picture of the bull when said bull burst through the branches almost goring the surprised man. He got
away and into his car, but I imagine his heart rate took about four hours to
return to a normal rhythm. 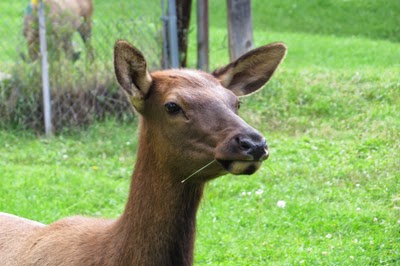 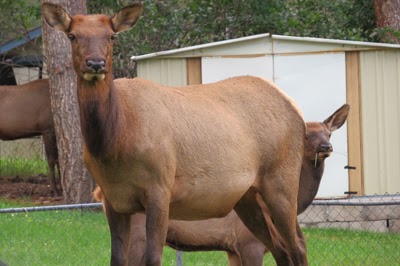 Some of the herd moved into the field behind our house the
other day, I grabbed my camera thinking I could get some great shots of the
cows and young elk gathering there. We have a five foot chain link fence
surrounding our yard and tall ponderosa pines, so I felt safe enough. I clicked
away getting terrific shots of these large, sleek brown females in the field.
Zooming in, I caught a close up of a female with a blade of grass sticking out
of her mouth. Mom and calf near each other. With all our rain this year, the
grass practically glows green. Beautiful. The huge bull stood up the hill
across the upper street watching over his herd that slowly grazed along. His
mouth open, nostrils flaring as he sniffed the air, I assumed he was checking
out his girls. I learned later, much later, he was on to my presence. Who knew?
There I stood, as he made his way to the entrance of the
field. Snapping photos of this majestic beast, muscles bulging, antlers
sporting the six points on one side, seven on the other. Huge animal. *snap,
snap* Oh, he’s so close. Hit the video button Sandy. This is amazing. *whirrrrr* recording.
He appeared to just be coming down to herd the females back
onto the road. I’ve seen it done. I figured he would come down and circle
behind them. There was no visible agitation to the animal, I felt no danger.
Then within ten feet of me behind my fence, BAM! He turns
and heads straight in my direction antlers aiming. A wood post and chain link
fence stood between us. His abrupt action created a terrific need to flee. And
flee I did! With the video still rolling, I ran for my back door. Not knowing
if the beast would be angry enough to leap my fence, I just ran.
Remember what I said about loving adventure? All I could do
was laugh as I ran. My heart rate soaring into the blue sky above. I didn’t
look back. I just got to the door as fast as my legs could carry me. I turned,
once behind the screen door, looked to see where he was, half expecting to see
the monster within the confines of my yard. Thankfully, he stood on the other
side near where I had been mere seconds before. When a bull in the rut gets
frustrated, they use their rack to rip up bushes or dig up grass which he
proceeded to do. As I watched him from my protective screen door, he continued
to stare at the spot where I had been, not where I was. So I began to wonder if
he smelled me more than he saw me. Either way, I’m glad he missed me.
I discovered how that man must have felt. I don’t think my
heart rate returned to normal until almost bedtime. Did I learn my lesson? Well,
sort of. The herd is still around, I’m still taking pictures, but I keep my car
handy. Then I watched him chase cars going by with his head aimed at the
bumper. Uh oh.
This is so going to be in a book someday….
—-
Editor's Update: A few days after this incident, Sandy had out her camera again! (Thanks to Sandy for providing the elk pictures and videos)
—————–
Sandy Nadeau's RED GOLD is a tale of adventure, danger and intrigue. Don't miss it!
Mandy
Phillips loves life with her husband running an adventure ranch in the
Colorado mountains, but when Mr. Shonee, their crotchety old neighbor,
tries to stop them from building a kid-size old west town their dreams
of expansion are crushed.

Is Shonee just being a difficult neighbor, or is something more
sinister going on?

A discovery on the property of Colorado's state
mineral leads to more mysteries for the ranch, and then a teenage guest
finds herself thrust head first into danger.

Mandy will have to rescue her, but who will rescue Mandy? Her faith
in God is her only source to keep the guests safe, solve the mysteries
surrounding her ranch, save her neighbor from himself, and discover the
secrets of the Red Gold.