In the Author’s Own Words: Anya Novikov on Christianity and Witchcraft

Today we're here with Anya Novikov, to ask her three pertinent questions about her book, Circle Girls: Once Upon a Witch. It's not too often that we see a Christian-themed story that incorporates witches, so let's discover just what does happen when 1692 collides with 1992

As a long-time American Literature teacher, I saw firsthand how the Puritan unit resonated with teenagers. Just the term “Salem Witch Trials” invited them to pay attention. They soon learned the events of 1692 had little to do with the practice of witchcraft. Instead, scapegoating, jealousy, finger-pointing, blaming others for personal problems and mostly, bullying those who “didn’t fit in” caused the executions of 20 innocent people.

To make the witch trials relevant for today, the students tied the historical events into life around us, for all the reasons mentioned above. Sadly, bullying and scapegoating will never leave civilization until people learn tolerance and personal responsibility. For many, it’s easier to point fingers and poke fun, particularly during awkward school years. Inventing a story with two parallel timelines became easy, not only because history repeats itself, but because  I also believe everything changes even as it stays the same. 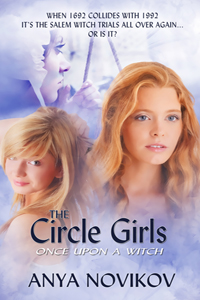 Indeed, the title and even the term “Salem Witch Trials” are provocative, but the message of The Circle Girls does not present “witchcraft” itself or glorify it in any way. Historically, until the age of reason and scientific discovery, people had no explanation for illness, failed crops, deformity, drought. Should a herd of cattle sicken and die, the idea of a dislikable neighbor casting a spell on the animals was believable.  Adding to ingrained suspicions, the “new world” was a place of unexplored wilderness, wild animals, and other fearsome unknowns. The devil was certainly more active than usual in such a supernatural, dark environment, but mere innuendo could do a lot of damage, even without the presence of witchcraft or demonic activity. When a circle of proper Puritan girls accused friends or neighbors of witchcraft in 1692, nobody disbelieved their allegations.

In the book, both modern-day Delli Willis and her 1692 counterpart Deliverance Wyllys are ardent Christians.

Salem captivated me from my first day in the classroom. I knew some day I’d find a way, a time, to write things down. And in the meantime, I never stopped researching or learning. (I firmly believe teachers who don’t learn more than they teach are just not good teachers.) The textbook’s teaching guides were a wonderful basis, but I found even more information in personal research. Sources are too numerous to list, but I was always on the look-out.  I once found a children’s book at the grocery store that encapsulated the witch trials to perfection. A country lifestyle magazine I subscribed to featured pictures of the still-existing homestead of victim Rebecca Nurse. My students enjoyed everyday stuff like this.

Famed Puritan theologian Cotton Mather’s own account, “The Trial of Martha Carrier” plays a big part in the book. In my classroom, as in Delli’s, the students stretched their brains for logical reasons to explain accusations against her. For instance, an accuser claiming her “shape” had choked him was likely suffering from a sore throat. And of course, all the cattle Martha had “bewitched” were in reality suffering from a contagious disease. Nonetheless, this innocent woman was hanged as a witch in August 1692. She didn’t stand a chance with even Cotton Mather officially naming her “a rampant hag.”

The Devil in Massachusetts by Marion L.  Starkey was an invaluable resource, and I still love re-reading the copy I bought at the Salem Witch Museum—after checking out the local library’s copy around a thousand times. Her mention of 1692 gossip alleging a dark haired man seen emerging from a marsh at dusk helped inspire The Circle Girls’s swamp-man Gabriel. They both even wear dark trousers and blue shirts.

One thing to note: The Circle  Girls is set obliquely in the “present day” but the modern clique of girls live in 1992. Not only was that year the 300th anniversary of the witch trials, but the the modern story could then live without the ever-presence of today’s electronic devices, smartphones, social media, and apps. Delli herself even has to use an actual, old-fashioned encyclopedia to see if her own name appears on the historic list of witches.

I sincerely thank my editors at Pelican Book Group for helping me make  this slight step back in time, and for PBG’s endless support for my circle of girls.


A Note from our editor: When Anya submitted this manuscript, it was at the height of bullying being in daily headlines. I was not only captivated by the story, but in the creative way the story meets bullying head-on and gives a voice to silent victims who may otherwise not realize their true worth. I'd like to share with you the Author's Note from back of the book. It says so much!

Although I’ve used actual people and dates in my 1692 world, The Circle Girls is a work of fiction. This story is meant as an example of people’s reluctance to respect the differences of others. People often cast blame and bully those who are not quite like they are.

The advice we are to take from the Gospels (Matthew 7:12; Luke 6:31) is simple: treat others the same way we want to be treated—with respect.

If you are the unique-but-different victim, or one who doesn’t have the confidence—or the friendships Gabe has in the story—to resist bullying and taunts, please don’t suffer in silence. Talk to your parents, a favorite teacher, minister, a trusted neighbor; look for anti-bullying support on the Internet—find the comfort and aid to help you cope.

I hope the message in The Circle Girls will help us each to remember that in the sight of God, every one of us is fearfully and wonderfully made. (Psalm 139:14). We’ve been created in the image of God, and He doesn’t make junk!