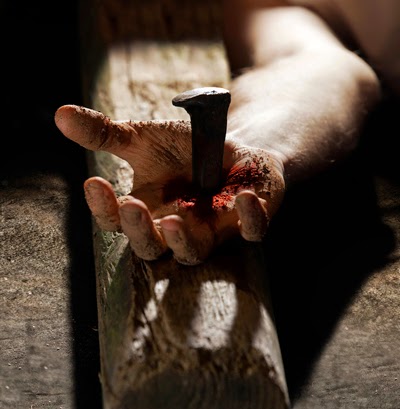 Today, Good Friday, Jesus is beaten and crowned with thorns. He is forced to carry a heavy Cross, He is nailed to it, and He suffers excruciating pain for three hours while He atones for our sins and then finishes the Passover. There are no better words to describe this than in the Gospel. Read carefully the words from John's Gospel.

Soak in the cowardliness of Pilate. How he orders Jesus to be scourged and then crucified even though he finds no fault with Jesus. How many times have you sinned—or allowed sin to happen—out of fear for your own well-being?

Take note of who is at the foot of the Cross. Only one of the Twelve. The rest are hiding away frightened for themselves or perhaps unable to face the horror they cannot undo. Either way, they abandon Jesus in His darkest hour. How many times have you left a friend in need because it was inconvenient or too emotionally draining to spend time with him/her?

Be attentive to the Old Testament prophecies that are fulfilled, not for His sake (Jesus knew Who He was) but so that we could have a tangible basis for our belief even before we have a mature faith.

See how Jesus, even in suffering and death, doesn’t neglect the Law: He is the priest offering sacrifice for the chosen people. He is the sacrificial Passover Lamb Whose blood saves the firstborn (and all those adopted into the fold). He completes the Passover meal as God prescribed in the Old Testament, by drinking wine from the hyssop branch. How many times have you ignored  the commandments because they are inconvenient or because we are saved by grace, and so the rules obviously don’t apply? (Consider this: If Jesus followed the rules, and He is our perfect example, then what does that say about rules?) It is only after He has suffered and bled and completed the Passover, that he then gives over his Spirit.

Today, at 3PM, the hour which marks the death of Jesus, take some time to reflect on His Passion—this act, which saves you and me from eternal death. Call to mind times when you have sinned, and then, as Jesus did, give your spirit back to the Father. “Father, into your hands, I commend my spirit.”