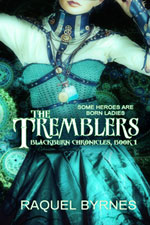 The steampunk world of the Blackburn Chronicles is a dangerous place. Its tales are those of dark heroes, fantastic devices, and unbreakable love.

Researching the concepts for the world, the characters, the mechanica technology, and the sweeping adventure all took me down unexpected paths. Charlotte's adventure takes her from under the protective electric Tesla Domes that cage her entire city to wild frontier towns above the clouds, the fiery wasteland deserts, and even the depths of the roiling sea.  World building for this series was always on the epic scale.


Charlotte, on the run from the shadowy Order of the Sword and Scroll with the mysterious spy, Ashton Wells, flees via air ship to the floating settlement of Outer City.

The last frontier of the broken world of the Blackburn Chronicles, the sky territory is home to outlaws and pioneers. Lawmen keep the peace at the bustling ports where every kind of fantastic air ship and hodge-podge dirigible brings those who seek their fortune.

Inspiration for the wild-west settlement of floating buildings and countless air ships gathered around a central market came from my fascination with Asian cuisine and the water markets of the far east.

I drew ideas from places like the Mekong Delta floating markets where hundreds gather from along the coast to sell fruit, meat, teas, whatever a customer may need. Lunch pontoons with pots of bubbling soups bob alongside motor boats selling strong coffee or perhaps the occassional chicken.

I wanted to create that chaotic, lively market where customers link their motor rafts together and toss goods back and forth overhead. The frenetic port where Charlotte first encounters life outside the city life she knew was teeming with sights and smells and dangerous individuals.

It was the perfect setting for harrowing air battles and deadly chases amonst the fragile beauty of the clouds. Air ships, dirigibles, personal balloon craft all strung together in a dangling city above the fractured nation of the Peaceful Union.

Among the drifters and outlaws in floating frontier Charlotte encounters fellow tinkerers, dangerous privateers, and Port Rodale's Sheriff Sebastian Riley, the man who tamed the wild sky settlement with a crooked smile and a revolver.

Looking to the wild west for that unpredictable frontier feel, Outer City's sheriff is a throwback to the iconic lawmen of the old boom towns. From his long dark duster jacket to the mechanical hand that sparks in the rain, Sheriff Riley is a true mix of steampunk mechanica and old west charm.

Outer City is just one of the fantastical places found in the world of The Blackburn Chronicles. I can't wait to show you more!