A Great Calamity has fractured the whole of America

"Whipping rotors stirred the air and vibrated through me. Security aero craft hovered overhead, the bulbous silhouettes of their blimps dark against the sky. Dirigible pilots trained powerful lamp beams down on the road, the lights sweeping to and fro. Above it all, behind the clouds, nearly touching the stars, the Tesla Dome’s protective grid glowed purple against the inky night."
~Charlotte Blackburn, The Tremblers

The steampunk world of The Blackburn Chronicles is a dangerous place. Its tales are those of dark heroes, fantastic devices, and unbreakable love.

In book one of the YA series, The Tremblers, 1885 America is vastly different from the one you and I read about in our history classes.

A Great Calamity has fractured the whole of America toppling the government and killing millions across the entire nation. From the embers rose The Peaceful Union, with its symbol of the dark phoenix that promises protection and order from the chaos and death outside the city-states.

Charlotte blackburn, is a daughter of this new society that huddles beneath the massive churning steamworks of the electric Tesla Domes. 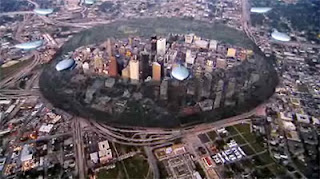 The thought of a city caged with an electric grid was so fantastic. And yet, it was not unheard of.

Creating the carefully cloistered city-states was an idea that began several years ago when I read about a proposed project to dome the city of Houston, Texas.

The Victorian Era in America was era of technology on the cusp of unimaginable innovation. Captains of invention moved our nation forward in communication, electrical advancements, and mechanical might. Steam devices and railroad steel dominated.

Now imagine all those great minds pushed by a panicked populace to invent and create at breakneck speed. Not for the expansion of knowledge, but for survival. A population rocked by massive disaster would advance differently.

Charlotte's story takes placee in a vastly reimanged history. Massive machines to clear rubble churn in the cracked roads of Manhattan. Rebuilt landmarks sparkle with metal facades and ornate decoration. Steam-powered carriages and power cycles roar along the avenues. And yet, outside this electrical marvel, the wasteland teems with poison vapors, sand storms, and bright flaming chasms.

What might force a debutante to flee from this safe place?  Charlotte Blackburn is beautiful, intelligent, and a gifted tinkerer who lives in a cloistered world of wealth and privilege. But when her father is abducted, and a strange sickness starts transforming men into vicious monsters, she discovers that technology is no protection at all.
I can't wait to share with you more of Charlotte's dangerous world! From the monstrous Wind Reapers to the strange creatures of the deep, the Blackburn Chronicles will take you on a journey you won't forget.
If you like alternative history, sweeping adventure, and fantatic devices, check out my upcoming Young Adult Steampunk novel, The Tremblers.
+raquel byrnes