The world has changed forever and so has fashion 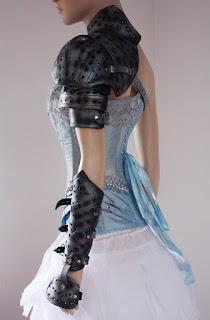 The steampunk world of the Blackburn Chronicles is a dangerous place. Its tales are those of dark heroes, fantastic devices, and unbreakable love.
When conceiving the world of The Tremblers, I wanted the aesthetic of a steampunk world, but for me, there had to be practical reason for all of the gears and sprockets. Cogs and brass for fashion's sake only didn't match with my vision for the series. 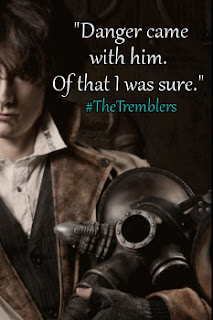 There had to be a reason for someone to don mechanical devices and articulated lens goggles. So, I created The Great Calamity. A continent-wide disaster that set off a chain of earthqukes fracturing North America.  It is what changed the world of Charlotte Blackburn forever.  Her world no longer felt safe and the fashion and architecture of the post disaster era reflected that.
Deadly vapors from the burning chasms called for face masks or filters when leaving the safety of the Tesla Domes. From glass face plates to leather nose and mouth covers, the citizens of the new Peaceful Union were familiar with every kind of breathing apparatus.
Corsets now had gum rubber lining to minimize shocks from the static energy created by the massive electric Tesla Dome that caged a rebuilt Manhattan. The outer bodice of gowns bore the aluminum metal links of chainmail; another measure of protection against possible flying debris in the event of another quake.

In Outer City, the floating sky settlement, the wild boom town citizens wore leather lined with armour. Assistive devices like mechanical braces to strengthen injured arms, hands, and legs were common in the sky harbors. Being so high in the sky, the sun required the use of tinted goggles and additional filters. Many citizens bore hidden weapons tucked into the ribbon of a top hat or disguised as jewlery.
One of my favorite wardrobe research pojects was the bedouin inspired wraps and tunics worn by the Wind Reaper clans. Exeedingly hot with poisonous sandstorms, the brutal conditions of the Wasteland called for a different kind of clothing. Reapers lived on humongous walking fortresses that roamed the constantly shifting dunes and required more ease of movement and protection from the airborn embers that smoldered on the winds.

The most classic treatment of clothes in The Blackburn Chronicles is the uniform of the those belonging to The Order of the Sword and Scroll. Crimson cloaks and armor breastplates worn by the knights harken back to the centuries old origin of the powerful society. Ashton Wells, spy for the Order, favors a knight's blade over the more modern tracer gun.
Charlotte Blackburn, the heroin of the series goes through a tremendous transformation from debutante to dissenter and later…to the Dark Wrath.  Her ice-blue ball gown signifies the wealth and priveledge she enjoyed before Ashton Wells enters her life. As she becomes Blackburn's Daughter leader of the rebel group, Defiance, she dons the leather and linen of the sky dwellers up in Outer City. And finally, as she comes into her own as a warrior, her dark cloak, arm guards, and electrified baton transform her into the weapon she had become.

The world of The Tremblers, the first book in my YA steampunk series, The Blackkburn Chronicles, was so much fun to write. I can't wait to share the epic story with you!
+raquel byrnes