What Eventually Led to Me to Write The Putting Green Whisperer 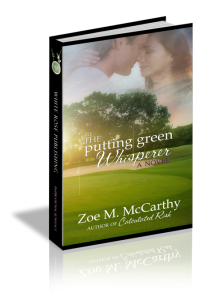 No, I’m not a golfer. I do own golf clubs, and I’ve played golf. And golfers have disrupted my life intermittently for years.

When I was sixteen living on the Guantanamo Bay, Cuba Naval base in the early sixties, my parents took up golf. They enjoyed the sport until my father in his seventies ran over my mother with a golf cart and broke her hip.

At the University of South Florida, I took golf because I had a crush on a guy on the golf team. Class members had to play a round of golf at a golf course. So, I hounded my roommate into going with me to a municipal golf course. I rented a small canvas bag of clubs. When we were on the seventh hole, I noticed my bag was lighter. The bag had a hole in the bottom, and I’d lost two clubs on the fairways behind us. We trekked back and found the clubs. Later, I told my uncle I’d scored ninety-eight. His eyes widened. “That’s fantastic.” I replied, “I only played nine holes.

John, my husband, loves golf, even though in his younger years he lobbed his two iron into a golf course pond. His father’s an avid golfer and in his mid-eighties still plays weekly rounds. My sister-in-law graduated from college with a golfing degree and runs children’s golf programs, such as for First Tee. When my in-laws and John talk golf the same way I gab about writing with my writer friends, I zone out.

Graduating from Wake Forest, John is a college basketball fan. I’m baffled how sneakers got their name. The screeching sneaker squeaks on basketball courts is my least favorite sound in the world. But I can enjoy viewing golf on TV. The announcers on the greens relay what’s transpiring on their hole in hushed voices.

When my sister and brother-in-law took up golf, they started attending what’s now called the Wells Fargo Championship in Charlotte, North Carolina. We joined them and have made a week of observing the pro PGA golfers play the links at Quail Hollow for fourteen years.

One year, the four of us traveled to the PGA seniors tour at Rock Barn in Conover, NC. My sister and I sat on the fifteenth green watching the over-fifty golfers putt and move on to the next hole. In one group, a male and a female caddy stood side by side on the edge of the green with their backs to us. The two young caddies talked quietly while their players prepared to putt. He was tall, and she was petite with her blond ponytail protruding from her pink ball cap. My heart experienced a sappy moment, and romantic what-ifs cluttered my mind. I turned to my sister, pointed at the caddies, and said, “My next book will be about those two caddies.”