Why Write Light of Logan NOW?

I fell in love with Mr. Charlie the day he arrived in my mind. Old and blind, he sat for hours on the courthouse steps speaking to no one. I knew he had an incredible story, but he was slow to share it.

Eventually, Ruth Cleveland appeared. Early twenties and trying to find her way home to Atlanta, Ruth’s beat-up car broke down in Logan, South Carolina. Doing odd jobs for a local attorney provided her with enough money to afford a cheap apartment. Every evening, on her way home from work, she sat on the courthouse steps with Mr. Charlie.

The whole issue of tax exemption for the church came up again one Sunday. It must have been campaign season. Who outside the church really cared? I did a Google search and was shocked at the anger directed to the church for not meeting its financial obligation to the community.

About this time a hard-working family attending my local congregation quit. Due to a rift with another family, they simply chose to stay home.

That’s when the character of Nate Bishop, jacket thrown over his shoulder, strode out of the mist of my brain cells. If something needed done at the Logan church, Nate was the go-to man. But Nate confused service with having a relationship with his Lord.

And then, BAM, Joseph Ackerman, Nate’s cousin, arrived. Growing up, Joseph always one-upping Nate. Now the man had political aspirations and the money to pull it off. But worse, Joseph Ackerman had a past history with Ruth.

Finally, I had my story. Thanks to Joseph Ackerman, churches closed and the impact was felt in unexpected ways. God chose Ruth to save the town, and Mr. Charlie to save Ruth. Nate had a lesson to learn, but God loved him and wanted to give him the desire of his heart. God does not expect us to be more than He created us to be, but Satan will take our weakness and create chaos.

My take-away for this story is three-fold. First, God is not a building, therefore Satan cannot defeat Him by taxing churches. And second, God wants a relationship with us, Daddy and child, more than our works. And third: God has a plan and it will be amazing!

To sum it up, why write Light of Logan now? Because the characters spoke, assumed their roles, and the problems they faced became timely in modern society. So, the time was right!

Available Now from Amazon and other online retailers 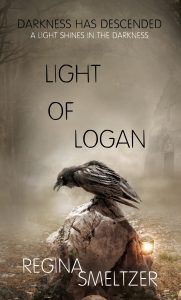