Character Interview from A Cardinal Christmas 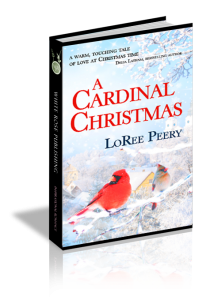 Tell us your name and a little bit about yourself
Hi. I’m Werner Wright. I’m a mechanic and held one job following tech training in Seattle. Then my parents were suddenly killed and I lost that job during my leave of absence. I didn’t get excited about it because I rely on the Lord’s leading and take a relaxed view of life day by day. Now, I’m exactly where I want to be, job-wise and everything else.
Where do you live, and why do you choose to live there?
I’ve recently moved back to Nebraska, to a tiny place I’ve always considered home. Due to God’s timing, I believe, I answered an ad for a fill-in mechanic at the garage in Edgewood. The automotive shop belongs to the father of the girl who captured my heart when we were kids. Blythe has always been the most beautiful person in the world to me.
What is a quirk of your personality that people don't know?
Though I’ve been content to let life pass me by through my “what will be, will be” attitude, I’d like to be noticed. Especially since my parents didn’t think I was important enough to tell me that we were leaving Nebraska years ago, rather than taking a vacation. That could be more like a character flaw than personality.
Who chronicled your story, and why do you think she picked you?
Now, that’s an interesting question. Why would LoRee Peery pick me? I’d like to think she found me the perfect soul mate for Blythe Travis. Plus, she really likes cardinals and I appreciate those red birds. They’re one of God’s gifts through nature and make me think of Isaiah 1:18. Sin is covered by the scarlet blood of Jesus, washing believers white as snow.
What obstacles did you overcome in order to reach your happily-ever-after?
That Blythe was a hard sale. She never got over her mad about the way I disappeared. We had a deep friendship as preteens, then I up and disappeared. She expected a letter or a call. We didn’t have cell phones like kids today. I showed up again while she was still dealing with an ex-fiancé who stepped out on her. She’s a go-getter, a planner and organizer. It tore at her that I wasn’t exerting manliness by pursuing a permanent job. But as I believe, God and His timing worked it all out.
Tell us about your special lady. What makes her so special?
It’s probably a cliché, but she takes my breath away. The first time I saw her, she shined brighter than the sun. She was my whole world those long-ago days we held hands and walked the railroad tracks east of Lincoln. I never met anyone to match her when I sought adult companionship. Now she’s a world traveler and has enviable, marketable skills. Did I mention that she’s gorgeous with her ebony hair, sea-green eyes, perfect size and shape? But the most important, her joy in the Lord has been restored and she’s confident He has our future. Also, she helped me forgive my father.
The first time you saw your special person, what did you think? Was it love at first sight?
Definitely love at first sight. I was strolling across a meadow, a clumsy and gawky kid. She had velvety black hair, a porcelain complexion with a few freckles, and a smile that hit me in the gut. We spent hours exploring the tracks, holding hands, and even followed the creek to a beaver dam. I never forgot her. I stayed at her parents’ home while she was still in Atlanta. I filled my senses with the pictures they exhibited in the house. At sight of her again, I knew I’d never let her go.