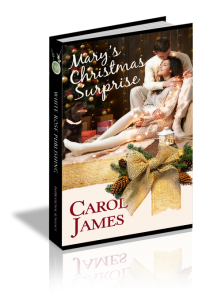 Christmas is a time of joyous surprises.

Surrounded by those I hoped would be part of my family one day, I sat on the floor of my boyfriend’s parents’ house as he offered me a stack of four wrapped Christmas gifts. “Open the smallest one last,” he said, “because it’s something you’ve already seen. We bought it together.”

It’s hard to surprise me. I’m generally pretty good at picking up on the signs, and I like to think that, with years of practice, I’ve perfected the “surprised recipient response.” Not to deceive, but because surprises are as much for the giver as the receiver. I love watching the enjoyment people experience when they believe they’ve “gotten” me.

That Christmas Eve, the gifts were all opened when I realized I’d only unwrapped three boxes. The fourth one, the one that held the mysterious item I’d already seen, was missing. After a cursory search, my boyfriend “found” it under the edge of the couch. At first I was embarrassed to be the center of attention, to have everyone watching as I unwrapped the previously seen gift, but I had no choice but to proceed.

As nonchalantly as possible, I opened the small box that promised to hold something uneventful, so we could get on with the rest of our Christmas celebrations. As I parted the tissue paper, I was greeted by a black felt tale mounted on gray velveteen. Eeyore. I grinned. “Wrap this up, and give it to me for Christmas,” I’d said when we’d taken pity on the sad fellow and purchased him weeks earlier during a shopping escapade.

I laughed as I slowly slid him from the box, and his forlorn eyes looked up at me. “I’d forgotten all about…” My words froze. As something around Eeyore’s neck sparkled, his face seemed to glow in the warm lights of the Christmas tree. Tonight he was dressed festively, wearing jewelry. A diamond engagement ring. Words can’t begin to describe my surprise and joy.

Christmas has always been a time of gifts and surprises, even if it’s something we anticipate, something we know is coming. On the night of the first Christmas, to say the shepherds were surprised by the angels is an understatement. Even though God had told them the Messiah was coming, I’ll bet they didn’t expect it to be “that” night. They were the recipients of the greatest Christmas surprise of all time.

That ring is still on the finger where my now husband placed it on that Christmas Eve forty-eight years ago. And Eeyore, having grown faded and tailless over the years, has a place of importance on the shelf in my office. They are reminders of one of the best Christmas gifts I ever received. 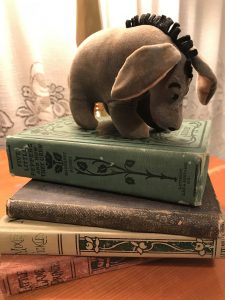 The greatest? “Thanks be to God for his indescribable gift!” I Corinthians 9:15