My novel, Forgiving Tess, is the story of a young woman with a past who is just trying to move on. Unfortunately, with an entire town that appears to be against her, and an uncle who loves her enough to not let her run away and just disappear, moving on appears to be almost impossible.

I wrote Forgiving Tess based on the idea that she, like so many of us, has things she’s done that she wishes she could erase. Because that’s not possible, Tess has to get through the messy business of forgiving herself whether anyone else does. Thankfully for Tess she not only has her amazing Uncle Stu to hold her accountable, but a new, rekindled love for a man named Josh Thorne, who she spent most of her childhood convinced she’d one day marry. Now that it’s actually possible, Tess struggles to work through the hardest part of her journey—moving on.

I believe readers will relate to Josh’s sudden appearance in Tess’s life—at a time when she’s just about getting things together. It’s terribly inconvenient for Tess and at the same time motivating for Josh, who is exactly the push Tess needs to recognize God’s unconditional love for her. As a pastor who is almost too good of a man to be true, Josh doesn’t apologize for loving Tess, and, although he isn’t perfect, does serve as a model for how we might treat others who are trying to move past those things that hold them back.

My hope for the novel is that it will speak to those who wrestle with some of the same things Tess does, and that those readers, like Tess, will recognize God’s unbelievable forgiveness and peace. 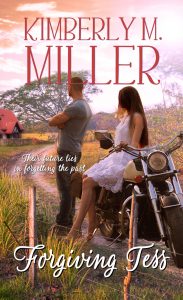