Dove with A Blog

One of my kids’ favorite TV shows features a four-legged canine who, at the end of his zany, slap-stick 30 minutes, blogs about a meaningful lesson he learned during that episode. As I was trying to decide what to blog about regarding my new release, Fanatic Surviving, a thought occurred.  Hey, wouldn’t readers prefer if my main character, Dove Strong, wrote this blog? She’d reveal her mind-blowing discoveries from her last adventure. She’d call it ‘Dove with a Blog.’ (Yes, I know the title doesn’t rhyme.)

Big snag. Dove Strong, though a teen, is from an off-the-grid family, so there’s no way she’d know how to type, let alone use a computer, laptop, or any such electronic device. But then again, if an audience will believe in a talking dog who can type up his blog with paws, I guess they’ll gloss over Dove’s technical inabilities. And really, a big part of the second book of The Dove Strong Trilogy is Dove spending more time in the ‘real world,’ learning and encountering new experiences. What are some of Dove’s earth-shattering experiences that she faces for the first time…and what truths does she learn from them?

Thanks for asking. Here is some wisdom from Dove Strong via her blog:

For the first time I have friends. Real human friends. I never thought I wanted any, but I have some now, and in case you’re on the fence about having friends, trust me. They’re handy to have around.  Like for busting you out of jail or an old church or whatever. If one of them has a Jeep, he’ll drive you places, like maybe to Idaho or Utah. And sometimes friends will even share their donuts.

Donuts.  That’s something else I’ve learned—try new foods, even if the item looks suspicious. I thought my mom’s crow and squash pie was the best thing I ever ate…until I chanced a donut. Best decision ever. During my time on Fanatic Surviving I also tried grasshoppers and cacti. They’re not as good as donuts, but I’m glad I gave them a chance because they basically saved my life.

Last bit of advice is try a change in scenery. If you’re from the trees, try a desert. Or if you’re comfortable in a town, risk a mountain. I recently discovered it doesn’t matter what nature surrounds you. If you’re a Christian, Satan can use any element to frustrate you. And God can save you from any element. So you might as well get out there and travel to a place you’ve never been to before if for no other reason than to see how different the stars look at night than what you’re used to.

So yeah…learn from my firsts and be open to change. And hey, maybe if you’ve never read young adult Christian fiction before, give my story, Fanatic Surviving, a chance. Because you might be surprised by your first encounter with this genre, too. 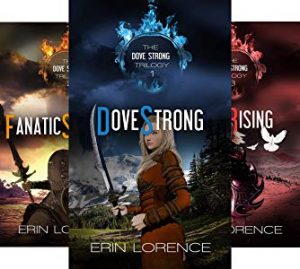