Found in the Woods – By LoRee Peery

When my editor, Jamie West, and I were working on the manuscript she reminded me of a wonderful passage in Job 12:7-10. Ask the animals, and they will teach you, or the birds of the air, and they will tell you; or speak to the earth, and it will teach you, or let the fish of the sea inform you. Which of all these does not know that the hand of the Lord has done this? In His hand is the life of every creature and the breath of all mankind.
I think of these verses often when I am outdoors or when I talk to others about the wolf I named Lakota in Found in the Woods.

Rather than a fun read like the other Frivolities books, Found in the Woods is edgy with elements of suspense 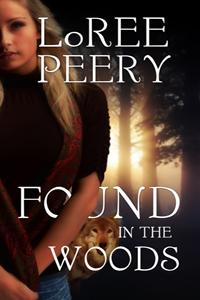 Blurb:
Beth Phillips returns to Platteville, Nebraska in order to begin a new life and to hide from her abusive ex-husband. The secluded cabin offers a chance to stay hidden and to draw closer to God, but Beth quickly discovers she is not alone in the woods. She befriends a curious, displaced wolf, but instead of fearing the animal Beth finds comfort in his company.
When field biologist, Aiden Holt, follows up on reported wolf sightings, he finds the animal and Beth Phillips. With emotional baggage of his own, Aiden usually prefers animals to people, but Beth's passion to keep the wolf draws Aiden in. Experience tells him the wolf needs relocation. His heart tells him he needs Beth Phillips. He camps nearby to capture the wolf, but can he capture Beth's heart, too?
Two souls, each lost in their own way, are brought together by one of God's beautiful creations. Will the Lord's path to their destiny be found in the woods?
Excerpt:
Beth’s insides had been fluttery and nervous ever since her fingers grazed Aiden’s back. Had he felt it, too? That zing was still there. She’d folded her hands between her knees, trying to get rid of the tingle, but the connection remained.
It didn’t help that she had imagined being held by him.
Even though the Lord fulfilled her deepest longings, she still yearned for a human touch, the assurance she could be wanted for the right reasons.
She jumped up from her chair, as antsy as Aiden for something to do. She’d been tempted by too many men. Didn’t want to go there. He was a decent enough guy, but too much was as stake for her to be so attracted.
Attraction. Could that be the reason he was restless?
“Would you mind bringing in a couple logs?” She didn’t give him the chance to answer. She yanked his coat off the chair and turned, arms outstretched. Aiden was so close in the small room, leaning forward and invading her space, that her knuckles hit him in the sternum. Awareness of his body heat, his nearness, awakened her nerve endings.
He bent nearer still. She smelled the chocolate on his breath. He pulled her towards him until only her hands fisted in the folds of his coat separated them.
In slow motion, he lowered his head. Only his strong arm supporting her back kept her from falling. She raised her face degree by degree, trying to concentrate on his sparkling, multi-colored brown eyes. But then she saw only his lips as he drew closer. His smell came close to intoxicating her. She was a goner. Aiden tasted as good as he smelled, earthy. Like fresh new leaves, wood, straight-from-the-trees outdoors, and a little smoky from her own fire.
Meeting his lips was as familiar as a recurring dream, yet as frightening as a nightmare.
His arms pulled her to him. The coat sighed to the floor.
She felt her hands encircle his neck as though they had a mind of their own. In Aiden’s arms, Beth felt as fragile as a sapling fighting for survival during the spring storm.
He pulled back. Had he felt what she did at their explosive connection?
She kept her eyes closed, and concentrated on savoring the moment as she felt his warm breath on her face.
The reality of being in Aiden’s arms was an exaggeration of any white-knight fantasy. His arms again obliterated the outside world.
Her whole body jolted at the intensity of their next kiss. The pressure of his lips deepened and swept her away. Sanity eventually returned. Beth turned her head and pushed on his shoulders. Did he react the way she had, with spots and flashes behind her eyelids? Would she reveal too much of those fireworks when she opened her eyes? She didn’t want him to view her as vulnerable.
“I’ve tried to imagine how you would taste.” He reached for her hands and lowered them in his. “You are the real deal, Ms. Beth Phillips.”
No. I’m all mixed up.
Lord, why would you bring someone like Aiden into my life when I’ve had such a weakness for men in the past?
That old looking-for-love-in-all-the-wrong-places phrase hit her full force. Now that she was a Christian, she had no business becoming interested in a man who, by all indications, didn’t share her faith. She took two giant steps backward, until she felt a camp chair against her leg.
But space between them meant nothing. Aiden had slid under her defenses and rattled her solitary foundation.
“I’ll help keep your wolf safe,” he rasped as he bent to retrieve his coat. “Keep your Lakota safe.”
His pronouncement rocked her to the marrow.
As his promise to help the wolf sank in, her mouth remained open. Before she could formulate a response, he shut the door behind him.
http://www.pelicanbookgroup.com/ec/found-in-the-woods