Why Write about Dark Topics?

I am often asked why I choose to write about “dark subject matter” like sex trafficking. I’ve seen some tragic stuff in my life, as I’m sure most of us have. As a public high school teacher, my glimpse of life has been influenced by teenage attitudes and behaviors, many of which are characterized by cynicism, bitterness, and an overwhelming sense of hopelessness. In the last five years, the number of kids with depression and anxiety has skyrocketed. Some of my students are absent more than they’re present because they simply can’t deal with coming to school. Some end up on homebound, in psychiatric treatment, and in a few cases…dead. One such case occurred last year, when a former student ingested a concoction of drugs at a party. She didn’t know what she was taking or that the combination of drugs was lethal.

In our immediate area, several young women went missing last year. One of them was found in a pond, another in a park. Both had been murdered in gang-related activity. Trafficking girls is the new currency for gangs. Drugs used to be the modus operandi, now it’s flesh. Traffickers work hard to ensnare the young women and make them believe what they’re doing is for the man they love. Sometimes traffickers use other young women to lure their friends from school into the life.

These are the stories that motivate me to write about the tough topics. They break my heart and make me want to do something, but there’s little I can do…except write about it. And make people aware.

There are some glints of hope in the darkness. Student-led after-school clubs like Young Life and The Edge, in which kids congregate, study the Bible, and pray for each other, offer a countering philosophy to the fray. These kids have a heart for God—they cry out to other young people in the wilderness that there is another way to fulfillment outside of existentialistic wanderings and dangerous coping mechanisms like drugs and cutting. These kids are truly bright lights who seek righteousness, long to help their brothers and sisters, and desire to be obedient to God. I’ve had the privilege of teaching a few of them. They’re special kids.

So when people ask me why I write about gritty topics, I like to tell them it’s because the news needs to get out there. The world is a dark, dark place, but how much brighter do torches shine in the darkness. God is the light—the contrast and the answer to the darkness. If life isn’t that bad, if the trouble isn’t really out there, then there’s not much need for God. If the darkness of sin isn’t that dark, then why did Jesus have to die for us? God’s revealing light must be cast upon the dark places in order to expose them. If we are not aware of these evils lurking in the shadows, then we are vulnerable to our enemy—“the devil prowls around like a roaring lion looking for someone to devour” (1 Peter 5:8). And right now, the youth of our country is easy prey. 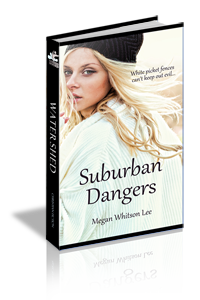 Sixteen-year-old Kaki Jones is a straight-A student, runs on the cross country track team and exemplifies the all-around great teenager. Her younger brother Brandon is the opposite. He parties, fights at school, has photos of naked girls on his cell phone and is in trouble with the police. But Kaki is the one who harbors a dark secret. Her life has changed ever since she met the cool girl, Sydney Diaz. Now Kaki is a sophomore by day and a commodity sold at the hands of gang members by night. She is now controlled by threats of violence against those she loves. Suburban Dangers is the story of what happens when parents look the other way, when a stranger offers more affection than a father and when God’s deliverance is the only answer.