Why did you write this particular story?

I wrote this for several reasons. The main one being Lou. She just wouldn’t shut up after I finished the Signal Me series. Mind you, that in itself is a very long story and would take up all this post and several more. She’d overcome so much in that series, that I thought a follow up would be nice. Several years later, what kind of a woman had she become? Had she followed through with her hopes and dreams or simply given up on them?

Casting Lou herself was easy. Evan was played by about three different actors during the course of writing, but finally turned into one, who seemed to have a very clipped, posh way of speaking at times.

Another reason is my love of disaster movies. And I wanted to write something with death, disaster and destruction at the very core of the story. Something different to what I normally write. (Yes there is a love story there as well, but this one is more like 80% action and 20% everything else.)

The English countryside is so pretty, especially up north in Cumbria. Lots of mountains and tiny little villages, where the most exciting thing to happen is the cricket match on the village green. Or a darts match in the local pub. Or someone drives into a fence and demolishes it. Yet when the fog rolls in off the water or the mountains, those pretty villages turn into something else. And I wanted to capture that.

The villages of Abernay and Finlay rest firmly in my imagination—you won’t find them on line or anywhere in England come to that. But the flooding of the villages to build the dam is based on fact.

The Ladybower Dam in Derbyshire was built that way. I can remember visiting it one summer with my grandmother. The water level was extremely low and you could see the church spire peeking through the top of the water. Again a visit to France in my teens, the water in a reservoir was so low, you could see the church and rooftops of the entire village which had been flooded to make way for the dam.

And that got my mind whirling. What happened to the people? Where did they go? And that part of the story unfolds in the journal that Evan’s grandparents kept.

On Amazon Pre-order in Digital and Paperback (Click Here) 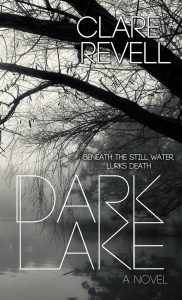 Archaeologist Dr. Lou Fitzgerald is used to unexpected happenings, and they don't usually faze her. After surviving a childhood disability, and dealing with an unfair boss, Lou has learned the art of rolling with the punches. But when she arrives at Dark Lake, what was supposed to be a simple archaeological dig is beyond even her wildest imaginations.
Land owner Evan Close has his own reasons for keeping the secrets of Dark Lake, and this attractive interloper is a menace. Her precious dig threatens to bring his house of cards tumbling down around him, and he feels helpless to stop it.
It soon becomes apparent there are dark forces at work, and Lou's simple assignment turns into a mystery. Solving that mystery comes with a steep price.