What’s the best vacation I’ve experienced and why?

My husband and I have been blessed with opportunities to vacation in many states, counties, and on four continents. However, the vacation that still gives me goosebumps when I recall our time there is our trip to Israel. There were so many memorable locations, but I’ll highlight a few. I was surprised at the lush vegetation in the north, the area around Caesarea Philippe-now called Banias, the northern limit of Jesus’s ministry.

The River Jordon was once a wide, raging river. It is fed by springs in Banias and Dan, and snow melt from Mount Hermon. From it’s source to the Dead Sea, it is only sixty-five miles long. Now it is tame, and narrow. We visited the traditional site where John the Baptist baptized Jesus. The country of Jordon was within a stone’s throw, and Israeli armed guards kept watch. Before heading to the river, we sat in a thatched-roofed pavilion where our guide described the often tense relationship between the two countries. Then he read from Matthew 3:16-17 where a dove settled on Jesus after his baptism. You might not believe this, but two whites doves flew in and settled in the thatch above us. My goosebumps had goosebumps! 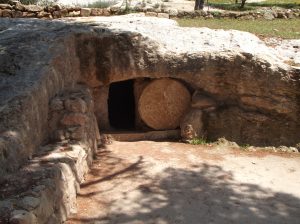 In Jerusalem we sat on the Southern Steps of the temple. They were excavated in 1968, and are the very steps Jesus trod. They don’t lead anywhere now as the gate into the temple area has been blocked for many years. There is a gold-domed mosque on the Temple Mount now. We listened to a sermon there about Jesus being the only way to heaven, and heard menacing voices from a window in the wall above us. Someone threw liquid out at us. Glenn and I were on the top row, and I’m thankful we had our umbrellas open.

Other sights and experiences: Jericho, the Dead Sea, Qumran, Masada. The gnarled olive trees on the Mount of Olives, some may have been there in Jesus time. The Garden of Gethsemane, now a small well-maintained and fenced off area. The Kidron Valley. Walking down the route Jesus took on Palm Sunday. The Western Wall, formerly called the Wailing Wall, the Mount of Beatitudes, rock-hewn tombs. 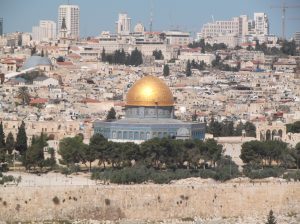 A sobering experience was our visit to Yad Vashen, the Holocaust Museum. Enough said.

Many Biblical places were brought to life. However, some areas have changed so much it’s hard to imagine what they looked like in Jesus time. For instance, the Church of the Holy Sepulchre is built over what many believe to be the site of Golgotha. But when we visited, it was so crowded that I had to leave. Wherever Jesus’s tomb is, it’s empty. To me, that’s what is important. 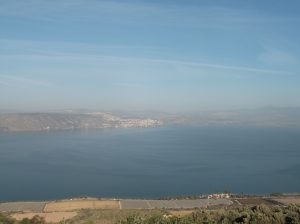 The most awesome experience for me was walking beside, and sailing on, the Sea of Galilee. Although historians say the Sea was much larger in Jesus’s time, it is still visible. Vibrant blue, surrounded by hills, and subject to sudden storms. The large group we traveled with gathered on seven boats and met in the middle of the Sea for our Sunday lesson. The boats were tethered together, and we listened to a sermon based on Matthew 14:22-36, when Jesus calmed the storm. A nugget of truth from the lesson—Jesus never promised us no storms. He promised he’d meet us in the storm.